I'm recovering from last nights Fresh Faced Follies, and a special thank you to those who came and saw my pineapples get very wet! I'm glad you all enjoyed it!

Tuesday night was a night I was particularly excited about. I'd watched the videos, read the interviews and seen the photos, but nothing really, in my mind prepared me for these amazing boys. I almost did slide off my seat in pure happiness! The Stage Door Johnnies for those who don't know or missed out, are comprised of three gorgeous Chicago men called Bazuka Joe, Jett Adore and (my personal new man crush) Ray Gunn. These guys won best group in 2011 at the Burlesque Hall of Fame (BHoF) weekend in Las Vegas and they most definitely earned it. Jett Adore has also won in the past "Most Innovative" at the weekend in 2010 for his performance of his "White Peacock" routine, which was absolutely stunning, and definitely a favourite of my peacock loving friends.

Bazuka Joe opened up the show with a towel removing routine, which was quite cheeky and a clever Chinese fan routine, which I really loved. I really enjoyed how sweet and clever his routines were and my personal favourite introduction for him was "he'll put the duck sauce on YOUR egg roll!"

Jett Adore not only did his stunning Peacock routine, but also a very Showman routine with lots of flying coattails and strategically placed bow-ties! Jett Adore and his costuming was amazing stunning and inspiring! After the show when he came out in a full-length Frock coat in sparkly purple brocade, I may have "fangirled" equally over both him and the coat.

Ray Gunn pretty much changed the way I look at the Disney Jungle Book movie now with a Jungle man/snake routine with a very suggestive apple at the end! He also performed a very rock/punk bump n' grind routine which resulted in spraying his drink everywhere, very messy, but in the best way possible! Fun fact I found about Ray too is that he works with a Steampunk dance group called "Brass and Cogs" which excites my Steampunkery love!

We can't also forget the girls supporting the Johnnies who are just as amazing! The MC Nadine Dubois was a definite hit and I enjoyed her banter with the audience, I thank her for learning what "Jetski-ing" was, I like it when shows are educational too. The Schlep sisters comprised of Minnie Tonka, who is all types of 1980's fabulousness and Darlinda just Darlinda, who competed in this years BHoF Reigning Queen competition and performed her neon strip which was amazing to watch! Both their group routines, especially their finale ABBA/Disco inspired routine were beautiful to watch.

All in all, I was so happy, excited and inspired by watching these amazingly talented people! It was worth every penny, and there's now a signed picture from them hanging in my lounge room soon! 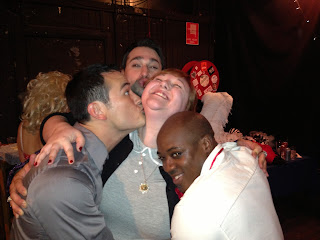