Today's Sunday, in between sewing projects, involves a little bit of a history lesson. Everyone should know their roots (even if you dye them!), and what better way to start than one of the first women to perform Burlesque than Lydia Thompson, whose "British Blondes" troupe began the Burlesque movement in America.

Lydia was born in 1838, and left home at 14 to start dancing, and in 1852 at 16, joined Her Majesty's Theatre as one of their dancers. In wasn't until 1855 though, that she did her Burlesque show, which were back then more about poking fun rather than taking your clothes off. They were still just as scandalous however, with women showing their legs albeit covered in tights, dressing like men in costumes that only went to their thighs and taking on their mannerisms while poking fun at them. Her dancing in the Burlesque extravaganzas made her acclaimed throughout Europe by the time she was 21. The Times in London called her "One of the most eminent of English dancers". 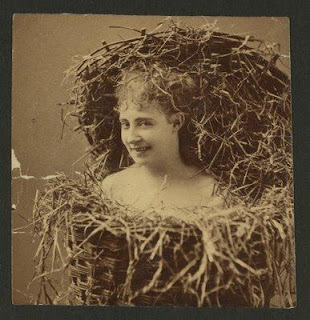 Lydia in her "Bird's nest" Costume!

In 1863, she married and had a child with her first husband, who died during a steeplechase just a year later, but by 1868, she had married again, this time to Alexander Henderson, and who for the next 18 years until his death in 1886, would be her business partner even after separation, and integral in helping her bring her most famous production about.

Lydia had decided in 1868 that Burlesque should and would be brought to America. It was to be an extravaganza of comediennes, dancers, actors and Burlesque stories....that was entirely performed by women. Lydia was also in control of "image" for the tour and with the help of promoter Archie Gordon, made sure that while their routines may be scandalous, her girls reputations were pure and that by the time they touched America soil, she was practically the Lady Gaga of English Burlesque.

It was an overnight sensation almost, with men and women both scandalized and entranced by what these "British Blonde" performers could do, with ample bosoms, revealing costumes for the time and "all natural" blonde hair. The shows were not as well received with open arms by everyone. American Feminist Olive Logan in a speech to the Equal Rights association of America lambasted Lydia's Blondes for their risque and demeaning performances. Mark Twain was also probably one of the most famous critics of the Blondes during their tour.

In 1870, one particular critic Wilbur Storey had it in for her troupe and had insinuated the depraved virtues and sexuality of her girls and as she put it "had called her by the most odious epithet that could be applied to a woman, and she could stand it no longer". By not standing for it any longer, she meant that her, her husband Alexander and one of the shows top performers Pauline Markham went and horsewhipped him while at gunpoint in his home, and while arrested, were only made to pay a fine. I can bet there would be a few people who would want to do that to their critics! 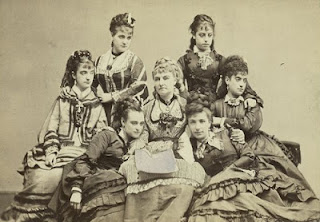 Lydia and some of her "British Blondes" Troupe

Amazingly, the troupe's original tour of only 6 months which was to be only the Burlesque Ixion (a Greek Mythology mind you about a guy who in some versions of the story performed oral sex on Zeus' wife Hera at the table and then got chained to a spinning wheel on fire for eternity as a result! Manners, really!), went on for 6 years and they performed 12 different Burlesque shows during that time including Robin Hood, Sinbad the Sailor, Robinson Crusoe and Aladdin! They were entranced by these strong, self possessed and unbridled women.

They returned in 1874 where she kept performing and touring, and her husband Alexander even bought a Burlesque Theatre in 1876, named the "Folly Theatre" where she performed for many years, in between touring American and Europe. She tried retiring in 1879, but she was back again in 1881 on stage. In 1894 she completed her last American Tour, then 56, and she was performing up until the year she died in November 1908, aged 70.

Lydia was survived by her Daugter Agnes, who later became known as "Zeffie" Tilbury, and moved to America to work in silent movies, including one with Greta Garbo and one of her last movies was "The Grapes of Wrath"in 1940.

Fun fact: Lydia had a "Lesbian Stalker" who had followed them from city to city, so enraptured with Lydia and threw herself at Lydia when she finally managed to get her alone. When Lydia tried to push her away, the attacker charged her with assault and she was arrested in Chicago in 1870!