So I managed to sit down and engorge myself on some light reading material. Both books were not huge, but one was Fiction and the other was Non-Fiction, one was for adults, and the other is one you can obsess over with your child.

I'm going to start with the Fiction one, it's a Young Adult novel, but don't be fooled by that. Etiquette & Espionage is By Gail Carriger, who also wrote my favourite novel series "The Parasol Protectorate" which is a very adult series compared to this. The wonderful thing about this series is that it is all set in the same universe as her first series, and if you haven't read The Parasol Protectorate series, you should after this just so you can have a giggle at how those characters show up in this series. 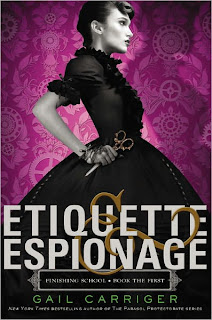 The series is set in the 1850's and Sophronia Temminnick is a 14 year old girl with no interest in being refined, girly or anything lady-like, and her curtsy is atrocious. With her mother desperate for her to be a lady at her older sister's coming out ball, she allows a strange visitor to the home take her to "Mademoiselle Geraldine’s Finishing Academy for Young Ladies of Quality". What no one realizes is that this is a different type of "Finishing" school, where they are taught to infiltrate society and become the best spies for the greater good of England.

As someone who did go to boarding school, I sorely wished this could have been my boarding school somedays! Gail has brought an amazing group of sidekick characters that compliment the main action and Sophronia's espionage into why the "Picklemen" are coming after the school. Again, the plot works in canon with Gail's first series, and I had some very big "Penny drop" moments after reading this as to some things mentioned in that. I particularly love her best friend Dimity, and her brother who is sent to the boys school, an Evil Genius Prep school.

The world is fleshed out beautifully, and I am really looking forward to the next book coming out in November this year (I have already pre-ordered!) called "Curtsies & Conspiracies". This book is like a small sweet treat, satisfying, indulgent and doesn't feel like a guilty pleasure. It is for children aged 12 and onwards, so if you have younger family members inclined towards science fiction, this is perfect.

Now! Onto more Adult pursuits in the non-fiction variety: The Steampunk's guide to Sex!

The only things I will say kinda disappointed me was that the vignettes of information could have been longer, I could have read 1000 more pages on each of the subjects readily. I will also echo what another reviewer said and that the essay on Polygamy may have been misplaced in the book and was already information I had been educated on about the topic before and was not necessarily fitting into the main line of the book, but I can see why it was put into the book at the same time.

With that, its time for me to wind down the bunsen burner, and leave you to explore these books. Both of these books are available on Amazon.