My weekend of Bad girls and Wicked Women!

So this weekend, I got to see a lot of naughty women be on their worst behaviour.....And it was wonderful!

Sugar Blue put on their final show for the year "Bad Girls and Wicked Women" at the Fly By Night, However Friday night I had the joy of going to The Strawberry Siren's Cirlesque class which was fantastic. A lot of it was conditioning and different ways to look after your body so its Burlesque ready and I definitely felt invigorated (albeit a little sore!) afterwards. 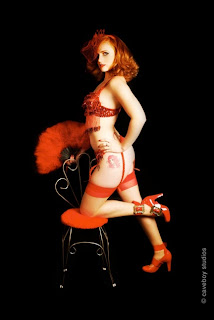 
I do however have Britney Spears' "Radar" Now in my head, But I can forgive that as what she taught were sometimes the most basic things, sometimes we all good, even about just touching yourself in the right way and the right way to hold yourself that makes such a change. There's a reason she's taken Miss Burlesque Victoria twice, she has the most amazing presence on stage and off, it was amazing to be in that room. One thing I've had told to me a few times is make sure your learn off many people, because everyone has a different way of doing things and it can help your creativity. I fully intend to keep learning no matter what happens for certain, and I always look forward to it when people like Strawberry Siren come over because its refreshing to have new points....I digress and it's definitely a post for another time!

Now! Back to the women! There was a great opening piece from the "Hussy Housefraus" a group of disgruntled housewives with guns is always a good thing just to remind your other half to take out the trash!

Returning performer Clara Cupcakes came back, glorious as ever, and covered in glitter. Clara is one of my favourites and a definite muse for myself so to see her on the stage, with an amazing energy and dancing with belly dancing fans to boot was exciting and stunning to watch, However I think I missed which bad girl she was playing, maybe from the hooting and hollering! If anyone can fill me in please do! but I thoroughly enjoyed it and it made me so happy so see her back!

Danica Lee was one of the next acts, a former Miss Burlesque NSW 2010. I've seen Danica Lee perform before, when she came over for the Perth International Burlesque Festival. I don't think another performer has made my pulse race like Danica does! She looks with a smoulder into the audience and makes you swoon. I can't get enough of her and her final routine of a priestess coveting her crystal skull was amazingly beautiful to watch, a true Femme Fatale she is, and I really hope she does well in Miss Burlesque 2013. 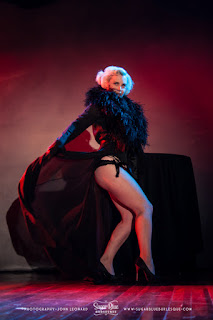 Let's not forget Strawberry Siren though! Her Routines of a fire routine using her redhead matchstick tattoo to light up her firesticks was comical and sexy, The best kind of Burlesque to me! She also did a great Statue of Liberty routine which was almost a homage to New York as well and I really enjoyed how clever and sassy it was. One thing I really love about Strawberry's routines are the fact she is focused on the crowd, while they can look and not touch, she's firmly with the crowd making sure they're engaged and turned on by what she's doing. I love it, I absolutely love what she does.

The Sugar Blue girls were firmly set in their wicked ways during the evening as well, with Charles D Barker, the troupe's personal Frank Sinatra, singing as Norman Bates and his mother to a future murder victim behind a shower curtain really quite enjoyable.

I also enjoyed Ruby DeLure and Dakota Peaches Chicago Charleston act, I hadn't seen Dakota Peaches, but they work off each other well and everyone loves a good Charleston!

I think fan favourite was for certain everyone's favourite naughty Pin-Up girl, Bettie Page in a "Page off" against Jungle Betty and Bondage Betty, wonderfully executed by Agatha Frisky and Kitty Litteur.

Also performed was probably one of my favourite routines by the Sugar Blue girls Agatha Frisky, Ruby DeLure and Kitty Litteur was a chair dance to Kanye's "Goldigger", and the bonus was the loser of the audience game "bite the pink box" (no really they were present boxes that were pink!) was their "Pimp/Sugar Daddy" and got to help them throw money!

I really enjoyed the night, and until next year....I'm sure we'll see more from Sugar Blue soon!